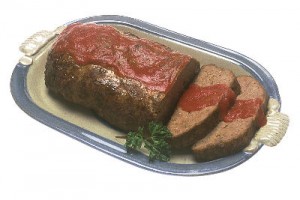 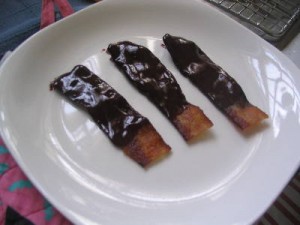 Learned this very simple recipe as a teenager working in a restaurant. Few years later I was pulling KP duty during Basic Training & was told ‘go start making the meatloaf’. Not knowing the entire USAF used a standard recipe book, I started making this recipe. The cook didn’t find out I wasn’t following the book until I asked for the Worcestershire Sauce. By that time it was too late to change. It was such a hit the cook used my recipe from then on.

Preset oven to 350°
Grease a loaf pan – shortening or Pam or your preference.

Put the beef in a medium-sized bowl, break it up and spread it out.
Sprinkle some salt and black pepper and the cayenne pepper.
Sprinkle the Worcestershire Sauce over it.
Spread the ketchup over it.
Poke a couple of holes in the meat and break the eggs into the holes.
Scatter the oatmeal across the meat.
Mix it thoroughly by hand – it’s fun, like playing in the mud. 🙂
Pack into the loaf pan, keeping it level and tuck down a bit at the edges.
Bake for about 1 hour or until a meat themometer reads 160-165°
Optional: Brush some ketchup or BBQ sauce across the top and bake another 5 minutes.

Can serve as is or with tomato sauce or brown gravy.
If you’re ambitious and have the time, a hunter sauce is great.
With a good enough hunter sauce, a rock would be edible 🙂

Variation – HamLoaf
When I have leftovers from a roast ham, I put it through my meat grinder.
Use the ground ham plus as much ground beef as needed to make 2 pounds of meat.
I’ve seen hamloaf recipes calling for all ham, but to my taste they are much too strong.
Serve slabs spread with sauce:
tomato sauce slightly thinned with juice from the pan, parsley, cilantro, finely chopped yellow onion, dash of WorcesterShire or lemon juice.

As many 8″x8″ sheets of waxed paper as needed.
Cook and drain your bacon. Should be crisp.
Set aside a few pieces to crumble to small bits.
Put canning jar filled with your chocolate into a pot of hot water and bring to boil.
I prefer Ghiradelli Semi-Sweet – use whatever chocolate or combo you like.
Stir until chocolate it thorougly melted; remove jar from pot.
Dip bacon strips in the melted chocolate and move to waxed paper to cool.
Lay a few slices on a sheet of paper on a plate, cover with another sheet, etc.
Spoon leftover chocolate onto waxed paper.
Optional: Dust with powdered sugar or cake sprinkles.
Sprinkle bacon bits on top.
Chill the coated bacon strips and wafers.
Warning: They seem to mysteriously disappear. Refrigerator gnomes?

7 Replies to “More To Life Than Bacon – Meatloaf”