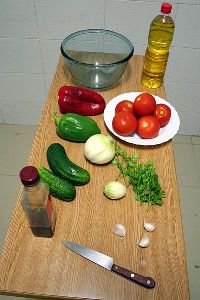 Gazpacho soup
is like sex – even when it’s not great, it’s still good.

The best gazpacho I ever ate was in a Spanish restaurant on Atlantic Avenue in Brooklyn, La Mancha; which is evidently now closed. 🙁 They also had a marvelous garlic soup and shrimp al ajillo. (Yes, I like garlic.)

Fry two slices of bacon, drain and save the drippings.
Chop bacon.
Blend a stick of butter with bacon drippings and 2 Tblsp of maple syrup.
Stir in the chopped bacon.
Butter will be softened by mixing, so should be chilled again afterwards.

Goes great on a toasted onion bagel or on baked potatoes.

6 Replies to “More To Life Than Bacon – Gazpacho Soup”