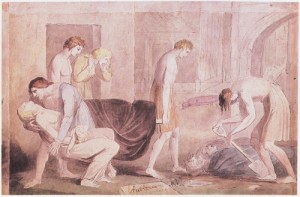 Chris Hedges’ article on his recent meeting with Assange is a mix of interview and essay, Assange’s statements and Hedges’ thoughts and expansion thereon are well worth reading – and thinking about.

(Excerpts of the audio here).

Those around the globe with the computer skills to search out the secrets of empire are now those whom empire fears most.
If we lose this battle, if these rebels are defeated, it means the dark night of corporate totalitarianism.
If we win, if the corporate state is unmasked, it can be destroyed.

I think he is unduly optimistic to think that ‘unmasking’ malfeasance will end it. Half of the pubic won’t even be exposed to the truth because they do not read or follow anything but MSM. If accidentally exposed to the facts, most won’t believe, because it conflicts with the way they want to see themselves and their country. The other half is either part of the PTB or too concerned with their own little corner of the world.

The global assault [] is part of the terrifying metamorphosis of the “war on terror” into a wider war on civil liberties. It has become a hunt not for actual terrorists but a hunt for all those with the ability to expose the mounting crimes of the power elite.

Not resistance, not the intent to resist, not the thought of resisting, but the mere capability to resist is a threat and will be treated as such.

Assange said he sees WikiLeaks’ primary role as giving a voice to the victims of U.S. wars and proxy wars by using leaked documents to tell their stories. The release of the Afghan and Iraq War Logs, he said, disclosed the extent of civilian death and suffering, and the plethora of lies told by the Pentagon and the state to conceal the human toll. The logs, Assange said, also unmasked the bankruptcy of the traditional press and its obsequious service as war propagandists.

Unfortunately, 95% of Americans really don’t give a rat’s ass what happens to anyone except them. Period.

The internet, our greatest tool of emancipation [] has been transformed into the most dangerous facilitator of
totalitarianism we have ever seen.

The world has been turned upside down. The pestilence of corporate totalitarianism is spreading rapidly over the earth.
The criminals have seized power. It is not, in the end, simply Assange or Manning they want. It is all who dare to defy the official narrative,
to expose the big lie of the global corporate state. The persecution of Assange and Manning is the harbinger of what is to come,
the rise of a bitter world where criminals in Brooks Brothers suits and gangsters in beribboned military uniforms—propped up by a
vast internal and external security apparatus, a compliant press and a morally bankrupt political elite—monitor and crush those who dissent.
Writers, artists, actors, journalists, scientists, intellectuals and workers will be forced to obey or thrown into bondage.
I fear for Julian Assange. I fear for Bradley Manning. I fear for us all.

Calling the ‘corporate totalitarianism’ a pestilence is more than a metaphor, it’s an apt description. Like all pestilence, it will eventually run its course, killing millions – perhaps billions – before the survivors develop an immunity. What will finally bring it down is that the world the CorporatePoliticalMiliary clique is trying to build & and control is ultimately unsustainable. It won’t be because The People people suddenly discover The Truth and rally to prevent it but because it is based on infinite availability & use of finite resources. It is a disease which kills its host and is thus self-limiting.

The tragedy is the suffering and death it will cause in its passage through humanity.

5 Replies to “Hedges, Assange and Wikileaks”