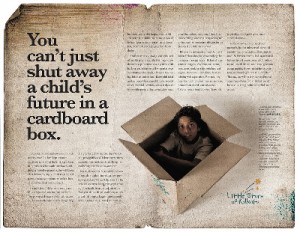 h/t to Ian Welsh for this link to Dissident Voice

Thinking Outside The Cultural Box

Aside from a few notable exceptions, empathy experts have failed to unpack the political questions involved in investigating the encultured brain. For example, to the extent that traditional social science has explained culture as the neutral transmission of beliefs, values, mores and laws, it doesn’t illuminate the conscious, active invention of culture by institutions serving particular class interests.

Studies on the evolutionary and biological origins of empathy are ongoing but we now have hard empirical evidence,not wishful thinking or even
logical inference, on behalf of a case for organizing vastly better societies. There is sufficient evidence that our potential for empathic engagement is being subverted by the dominant economic system and its ideology.

If an ethos of caring is an essential part of what it means to be human and an elemental requirement for human happiness, then empathically impaired societies must be found wanting and challenged. The tacit decision by neuroscholars to ignore or exclude this hypothesis from the research agenda, debate and conversation on empathy is inexcusable but not wholly unexpected.

My thoughts: it is a quick, non-technical read of some neuroscience studies. Bottom line is that we think the way we do because we are imprinted by our culture and that imprinting affect the way our brain works. It controls what we notice and what we ignore; how we act or fail to act; what we value and what we devalue.

For the last several decades, the cultural imprinting has been deliberately orchestrated toward producing people who think in a particular way, advantageous to those in control of the wealth, economy, government and media. Those in power have always promulgated as virtues the mindsets and actions which support their dominance.

New belief systems disturb the status quo and are either suppressed or successful. In the former instance, they may modify some of the practices of the establishment. In the latter instance, they become the new establishment and the whole process starts anew. That’s why dissidents are absolutely vital to preventing what I might call the ‘calcification’ of society’s mentality. And a ‘calcified mentality’ is unable to change course as circumstances change, dooming us to endlessly repeating what no longer works.

In recent decades, traditional religion felt itself unable to compete in the ‘marketplace of ideas’. They could have stood their ground regarding values and behavior, moving from a ‘because God says so’ justification to a more commonsense and practical justification for their beliefs and practices. Instead, they bought into the pseudo-liberal bullshit, watered down their message or couched it in NeoLibCap terms. Religion became just another Capitalist Venture. The result is a culture without enough dissidents to keep it morally and intellectually honest & compassionate. To keep it human.

We have a population widely unable to think outside their cultural box and therefore at the mercy of and completely under control of those who define the boundaries of what is culturally normal or acceptable. With a mix of regional subcultures, rural/urban, native/immigrant, there used to be enough diversity in the country to avoid a monolithic culture. but the culture has become homogenized today. Just as there is a .1% ruling class and a 99.9% ruled class, so there is a 99.9% agreement on the cultural reality. If there is anything that can save us, it’s that .1% who are dissidents.
Support your local troublemaker. And/or become one.

3 Replies to “Thinking Outside The Cultural Box”