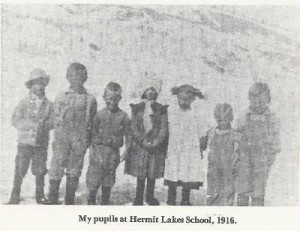 In 1916, Mabel Steele went to teach school at the ripe old age of 18, in extremely rural Colorado. The community consisted of three families who made their living raising trout for restaurants in Denver. She had to learn to maintain disciple when some of the students were bigger than she was. I suspect it was an eye-opener to a very self-confident, albeit naive young woman.
One of Mabel’s fond memories of that time is:

“Put into a large size, buttered baking dish (no use making a small amount, as you’ll just wish for more) about two quarts of milk. Add a cup of rice. Put in a slow oven for four hours or so.
Occasionally stir, as a thick ‘skin’ will form – stir this into the pudding.
After cooking almost to the end of the time, add no more than a half a cup of sugar and two teaspoons of vanilla and stir again.” 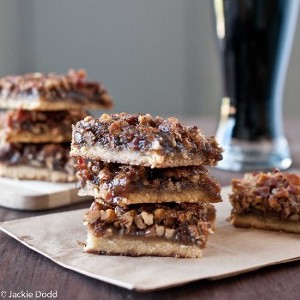 Beer & Bacon Pecan Bars
Combining my love of pecans and bacon.
Add beer, and what’s not to like?

Preparation:
Preheat oven to 350°
In food processor, a flour, 1/4 cup brown sugar, salt
Pulse to combine
Cut butter into cubes, add to food processor
Process until butter is mixed in
Add water and process to combine
Add more water 1 tsp at a time if there is undampened flour

Line 9×13 baking pan with parchment paper (easier to remove from pan)
Dump the mix into the pan. Press into bottom of pan in one even layer

Bake at 350° for 12 minutes or until light golden brown.
Allow to cool thoroughly

In pot over medium heat, add stout, cook until reduced by half
Add butter, stir until melted
Remove from heat
Add sugar, pecans, cream, corn syrup & stir until melted
Once mixture cools to room temperature, add eggs and stir to combine
Pour filling over crust, sprinkle with chopped bacon
Bake at 350° until fill no longer jiggles when you gently shake pan, about 24-30 minutes
Let cool and cut into bars

Combine in medium saucepan over medium heat until smooth.
When it comes to a boil, reduce heat, simmer 20 minutes, stirring often.
Remove from heat, cover, let cool. Chill and refrigerate in container.