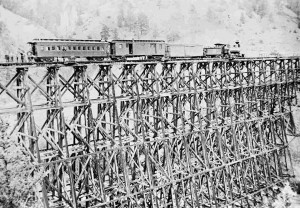 Grandma knew the river would be high. The snowpack was still melting even in mid-July. The ranchers in the valley would be wearing grins like hogs at a slop bucket as they saw their pastures and hayfields sprout with the bounty from the San Juans. She always had water for her own herd and hay crop, since grandpa had dug a ditch from Devil’s Creek to fill a couple of large ponds on the upper and lower pastures. Devil’s Creek never dried up – Charles had picked the right spot for his ranch and worked hard to make a go of it.

Grandpa had been a horseman – breeding, raising, riding, training and selling, often supplying US Calvary with mounts. He’d been in charge of the remuda for a stock drive when he discovered the San Juan Mountains in Colorado. He promptly bought out a small ranch and homesteaded additional acreage. Elected a county commissioner,, he was on track to prosperity when he was paralyzed by a stroke. Now he was laid up and the ranch was Grandma’s responsibility Since he could no longer handle the place and only he had the skill with horses, Grandma sold the horses and bought cattle, which required only hard work and optimism. The older children could do a lot around the place, but some things were still up to her

Since cattle are a once-a-year profit, if at all, the day-to-day expenses and sustenance had to be found elsewhere. Grandma had grown up ‘hard’, having taken over the household at the age of ten when her mother died. Aside from household skills, she was a fine gardener and able to maximize the short growing season of the High Country. In addition to vegetables, she kept chickens and hogs and was able to buy what she could not produce by selling vegetables, eggs, chickens and pork to Lake City, the nearby mining community. That was her goal today – taking a a buggy load to town to exchange for salt and flour and whatever. When push came to shove, she was simply doing what it takes.

When she reached the Lake Fork., the water was higher than she’d ever seen it, but she tucked her dress up and headed into the ford, the water flowing over the wagon bed and carrying away an occasional bag of peas. The family dog plunged into the river in a vain attempt to retrieve them, only to have the flimsy bags break up in his mouth. Managing to cross, Grandma proceeded the eight miles to town and conducted her business.

Returning home, she found the river even higher and completely impassable. Her only choice was to go over the High Bridge, where the D&RG line ran through her lower pasture. The wooden trestle bridge stood 125” above the river – and was never intended for a horse and wagon. Fearful of the risk, she sent the children across on foot, except for Herbert, her oldest boy. He wrapped his jacket over the horse’s head so it wouldn’t be spooked by seeing the terrifying drop, then led it across the bridge by the bridle, the horse delicately feeling its way from railroad tie to railroad tie, the wheels bumping up and down with the gaps between ties. Home again, home again, jiggety-jig.

“Some people have more guts than you can string on a bob-wire fence”.
– Betty Wallace

3 Replies to “What It Takes”