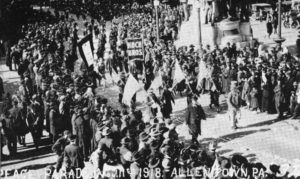 For irony, click the photo and note the banner. 🙂

Some few people have noted that November 11 was originally designated Armistice Day, and commemorated peace, not the glorification of war and warriors. It was that way when I was younger and was observed in a solemn mood; sober, thoughtful sadness. People wept – grown men, in a day when men wept seldom and never publicly. My grandmother never failed to observe every Armistice Day, crying softly, although our family lost no one in two World Wars.

Now the day is full of pseudo-patriotic celebration and self-congratulatory claptrap, a time for politicians to talk the talk without having to walk the walk. And for people to proclaim themselves Patriots when they are really unthinking chauvinists, generally too ignorant to know the difference. It’s rather like the flags which sprouted from vehicles after 9/11, when an unadorned driver was deemed unpatriotic or a terrorist sympathizer.

The change to Veterans Day is a perfect example of the Military Industrial Machine and its political toadies putting their spin on history, perverting and twisting the truth to serve their own ends. In this case it was not done as a way to honor veterans. If they really wanted to honor veterans, they would provide more support through the VA instead of cutbacks and more funding for vets: disabled, PTSD, homeless, unemployed, etc. And they would pay enough that military families would not have to rely on food stamps. Instead, veterans get words but not actions.

No, Veterans Day does not honor veterans. Instead, it diverts our attention from demanding peace. After all, if people really focused on peace and the tragedy of war, they might question our obsession with military prowess. That would never suit those who are enriched by our military adventures and/or made powerful by catering to the warmongers.

I am veteran.
I have enormous respect for those who have put themselves in harm’s way for others. Whether their service was justified and necessary or a result of being deluded by government and cultural propaganda, they demonstrate sincerity and courage worth my respect. I somehow can’t find the same level of respect for sorting shoes in a warehouse, shuffling papers in D.C. or analyzing intelligence safely away from any risk.

I do not ‘celebrate’ Veterans Day. I mourn on Armistice Day.
And I do sometimes brood sadly on our appalling ability to maintain our delusions, despite the truth being widely available.

“Religion-vendors and political men pour from the barrel, new lies on the old.”
– Robinson Jeffers