In February 1874, Colorado prospectors Alfred Packer, George Noon, Frank Miller, Israel Swan, James Humphreys and Shannon Bell left the Uncompahgre for Saguache, intending to go by way of the Ute Agency on Los Pinos. Packer appeared at the Agency alone, insisting that his companions had abandoned him while he was ill. 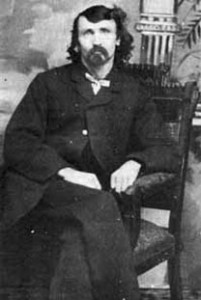 Suspicions were aroused when he displayed money he had not had before and property belonging to his companions. Confronted, he told a story of privation, murder and cannibalism. After confessing, Packer was jailed but managed to escape.

The following summer, Packer’s last camp was discovered, with the bodies of four men still wrapped in their blankets and a fifth sitting up, with his hands tied under his knees and an arm broken. The flesh had been partially stripped from some of the bodies and a butcher knife still stuck in Miller’s thigh.

For several years Packer went free, but was finally arrested in Wyoming and returned to Colorado for trial. Packer was first tried in Lake City in April 1883 before Judge M.B. Gerry. Evidence indicated that the winter of 1873-74 had not had much snow in the mountains, game was plentiful and there had been nothing to justify the eating of human flesh. After three hours of deliberation, the jury returned a guilty verdict.

As soon as the jury delivered its verdict, one spectator, an Irish saloonkeeper named Larry Dolan rushed from the courthouse with the first word of the verdict, delivering this memorable interpretation:

Nota Bene: Judge Gerry was one of only a handful of Democrats in the county and endured much teasing in this regard, which probably explains saloonkeeper Dolan’s view of the proceedings.

I have heard this tale since I was a wee lad. It has been the subject of several ballads, including one of my own and this one by Phil Ochs.

Ballad Of Alferd Packer (Yes, the man couldn’t spell his own name)

Sometimes it’s downright dangerous to be a Dimmycrat. 😀
“I think there is a moral here for every politician:
If you can’t get the votes, just get your rival in the kitchen.”

One Reply to “Rough and Tumble Politics”