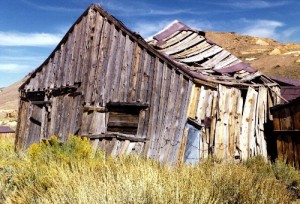 The world in general and America in particular often seems like a house whose owners can no longer maintain it. It just gets more and more messy and run down as time passes. They know that eventually the roof will fall in but they neither fix it nor move out.

I’m sure my outlook is not that uncommon today. Indeed, the way things are going, optimism might well be grounds for a psychiatric examination. It was not always this way, and it may be instructive to examine why.

Ken Smith has been keeping Joe Bageant’s website live and recently posted this.
Go on, read it. I’ll wait.

The takeaway I see in that short article is twofold: the person-to-person connection (which just happens to be father/son) and the whole-different-lifestyle thing.

Life was different when Joe and I were growing up. He was in Appalachia and I in Colorado, but one thing we had in common was that we both lived in a world where our lives were defined by our relationship to nature and to our people. The post-WWII boom eliminated much of that world for Joe’s people and to a lesser extent for my people (only because the Western Slope of Colorado is further removed from Main Stream Civilization than was Joe’s locale and still hasn’t caught up).

A way of life that was [reasonably] sane and healthy was a natural result of thousands of years of human experience, adjusted to our respective environs. The lifestyle which resulted from the unique circumstances of America’s post-WWII political and economic dominance was unnatural – insane and unhealthy. Those of my generation have at least some experience with a different way of life – by no means perfect, but IMO a hell of a lot better than where we are today – and I don’t think I’m having a Get-Off-My-Lawn moment. Most of the Baby Boomers and younger have never seen a society that was organized on any principle except Consumption. Indeed, as a rule, the only ones under 60 who were not seduced by the Consumer Society were those so far down the economic ladder as to be non-consumers and were therefore forced by dire circumstances to value things other than Things.

What was once a normative way of life – what one might call the ‘default’ way of living – now requires conscious attention and effort. It implies something of a siege mentality, with the besiegers being the Mainstream World. We tend to casually equate Culture with Civilization, but America has produced a culture which is in many ways antithetical to civilization, if one measures civilization in terms of broad education, understanding and appreciating the world and participating to the betterment of both ourselves and society.

In the coming weeks and months, I will be exploring different areas with an eye toward relocating, finding a place where the sense of community comes from sharing a location and people and way of life; where the fate of the maple syrup harvest is more important than politics; the migration of Canadian Geese more noticeable than the new TV season; sharing a sunset or breakfast with a neighbor more common and valued than the latest electronic gadget.

I have come to a time in my life where I highly value contemplation: for thinking, writing and the sake of my soul.
Time to get off the merry-go-round.