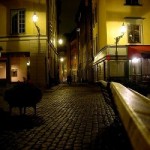 What we fight for is simple, and it is the historical mission of the Democratic Party. We seek a just world, based on a just peace – and, when required by circumstances, we are willing to wage a just war to accomplish it.

It is clear that nations of the globe, who previously did not have the strength to strike at the US, except by economic means, have set themselves acquiring a deadly deterant of atomic arms and the means to use them.

We must realize why they attack us – not because we are free, but because we are in chains. Chained to oil, chained to the debt we owe to those who take the moneys that the prosperity of Democracy creates, and feed it into the warrens of tyranny that poverty allows.

Because without justices, and without peace, there will be no more generations on this earth.

Unapologetically American – perhaps even ‘exceptionally American’ – in tone and phrase, a ‘call to arms’ such as I haven’t heard since FDR; a demand that we rise to the occasion and give future generations a future. It may be attacked, ridiculed or discounted as politically naive or unworkable, but every journey begins with a first step. I haven’t seen a clearer exposition of what needs to be done to clean up our society.