Some time ago, I wrote a post entitled Cockleburs of Culture and later added Cocklebur Time Again. I was, of course, using cockleburs as a metaphor for those annoying little habits, practices, beliefs and expectations which our cultures (or ourselves) seem determined to embed in our lives.

The Great God of Cockleburs was evidently not amused by my figure of speech. 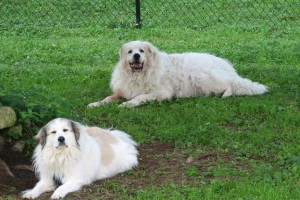 Some folks working in my back yard neglected to fasten the gate as securely as they found it when they left for the day.
Did I mention we recently adopted a two big dogs? Great. Pyrenees. Big.

In his daily round of walking the boundary, Jesse decided to see if he could force open the inadequately-secured gate. He could. He and his girl friend Chloe decided on a Great Adventure.

I spent several hours driving all the roads in the area, calling and searching to no avail. My area is heavily wooded, with dense undergrowth, able to conceal anyone or anydog that wants to hide. Both dogs are microchipped and carry a HomeAgain tag, so I figured someone would eventually call me. Jesse is friendly enough for strangers to approach. Chloe is very shy and trusts only Jesse and me.

Last time they escaped, I found Jesse about 11/2 miles away and walked him home on a leash, hoping Chloe would see/hear us and come along, but she was too shy. She did find her way home on her own an hour or so later. This second time, I was worried when I hadn’t gotten a call nor seen the dogs by nightfall.

About 9 o’clock the next morning, Jesse showed up on my front lawn. I opened the gate and he made a bee-line into the house, drank about a gallon of water and conked out. Ten minutes later, Chloe appeared and the process was repeated.

I don’t know where they spent the night, but we’ve probably spent 2 hours combing each dog and it will take another 2-3 hours.
Did someone say COCKLBURS! 😀

2 Replies to “Did Someone Say Cockleburs?”