Rummaging through Depression-era photos at Library of Congress, I came across some
I’d seen before, taken by Russell Lee for the Farm Security Administration in the ’30-40s. 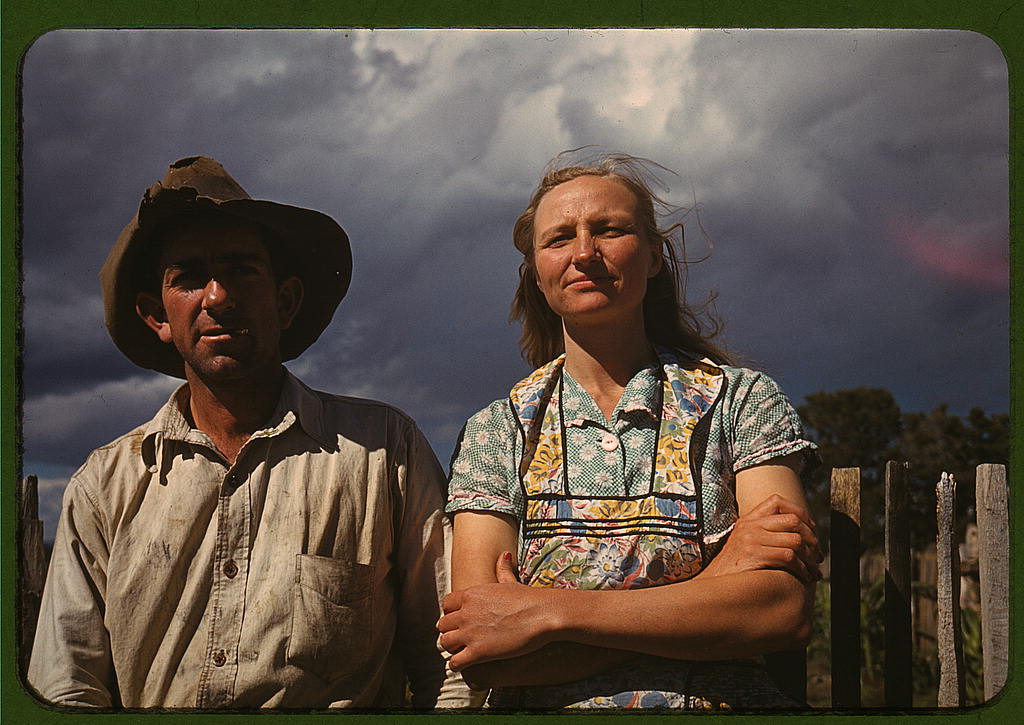 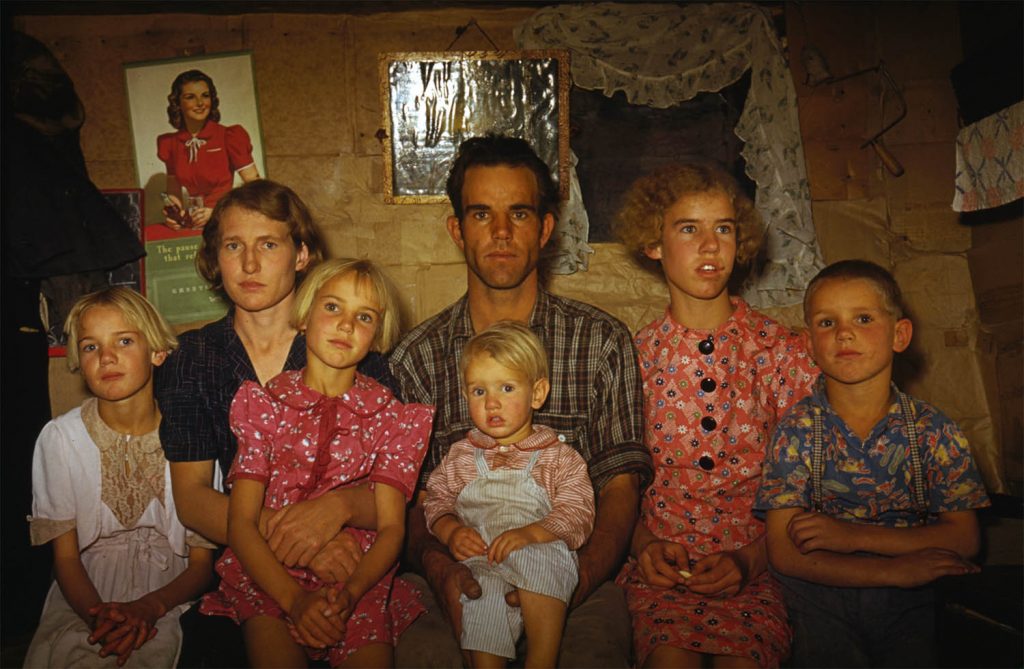 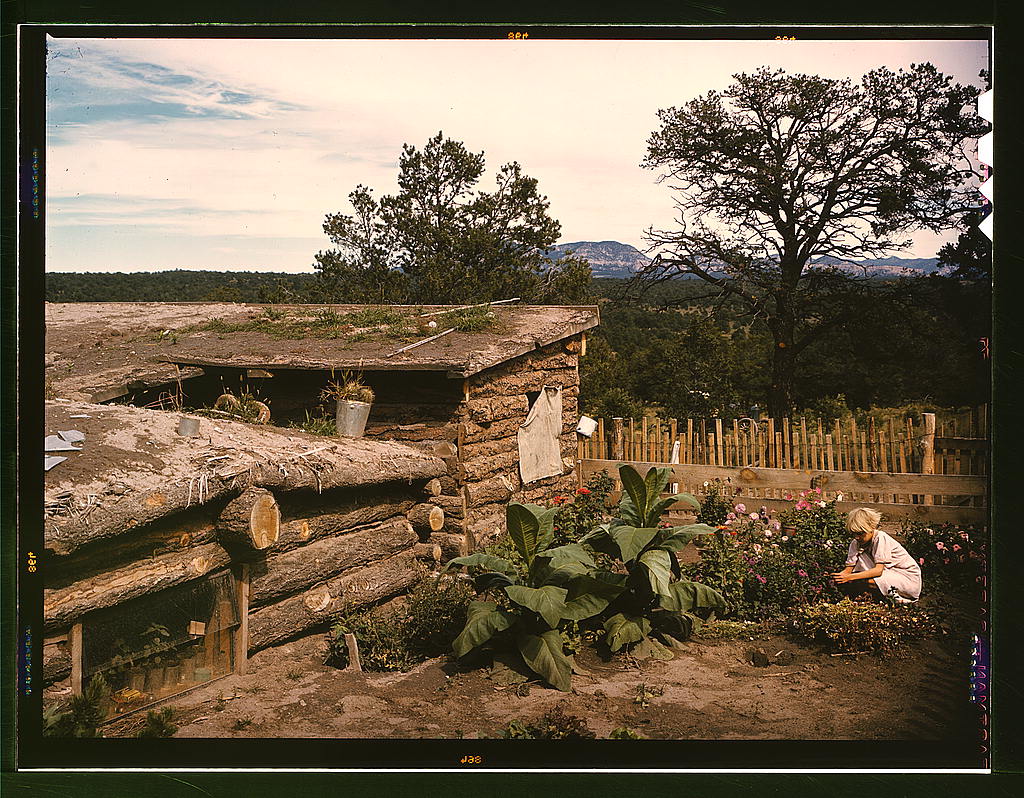 The families depicted had migrated from Dust Bowl areas, but rather than head for California, they settled in Pie Town, New Mexico, a wide spot in the road of western central New Mexico and tried to make a go of farming. The community numbered about 250 at its peak.

It was no doubt a hardscrabble life – dugouts, a few cabins and the rare framed home. The rigor of daily life was too much for some, but accepted by others as just part of The Way Things Are. Personal stories noted the freedom from being under the thumb of bankers and Big Business, a common complaint among farmers when a drought hit and they were unable to meet their debts. Tales also stressed the importance of ‘community’, since many arrived dirt-poor and it was a communal effort to build them a place to live and mutual support that enabled them to endure.

Community was part of many Americans’ way of life at one time, as the late Joe Bageant so artfully chronicled. There is undoubtedly a stronger sense of community among the underclass – it may be about the only thing that lets them survive – but there is none in well-to-do city neighborhoods or suburbia, despite their self-deluding pretense. The fact that upscale neighborhoods feel a need to pretend to have a community probably indicates a basic human need that is unfilled, just as making Farmers Markets and hobby crafting chic are attempts to reconnect with basic and important aspects of life.

It all got me contemplating on the proper “occupation” of mankind. I put ‘occupation’ in quotes because I do not mean it as generally used, to refer the what one does to ‘earn a living’. The older I get and the more I see of the world, the more I feel the entire concept of ‘earning a living’ is where we have seriously taken a wrong turn. “Earning” implies doing something for the sake of a reward from someone else as opposed to doing something that is inherently useful to us. Instead of getting what we need from ourselves (and by ‘ourselves’ I include a small, local community), we get what we need by spending our time doing things we would not do if we were not ‘paid’ to do – things which have value to our employers but no inherent value to us. It’s the difference between spending our time growing food or spending our time writing computer code or emptying bedpans in exchange for little pieces of paper with pictures of dead politicians and hoping someone will give us food in exchange for those pieces of paper. One of the downsides of the usual lifestyle is reflected in the fact that we have little control over the fruits of our effort. The decision on how many pieces of paper to exchange for a clean bedpan or an iPhone app is not under our control. We are therefore in an unfree state, in paper-based bondage to some functionary and subject to his whims and values, his declarations as to what our efforts are worth.

Having a ‘calling’ is today generally applied only to those engaged in a limited number of professions – clergy, medicine, art or perhaps even the military. It was once applied to all sorts of professions and trades and in theory to all occupations. Farmer, carpenter and cobbler; butcher, baker and candlestick-maker, every Tom, Dick and Harry was ‘called’. It was always the understood, even if only tacitly, that the Call was from On High – that God had a particular career path planned for everyone. Perhaps the notion of a ‘calling’ has declined along with the decline of religious observance among the many. Now, the only mention one finds is among the extreme religious fanatics, who seem to not only feel Called but that their Calling is to rule the lives of everyone else. (I’m talking to you, Ted Cruz and your batshitcrazy father).

How many of us spend our time doing what is valuable and meaningful to us as opposed to doing what others decide is valuable to them? I know a few who are that fortunate, but I can count all of them on my fingers. My oldest brother became a physicist and mathematician, forgoing his calling as a musician. He would have been less secure but happier at a keyboard. I abandoned my calling to be a poet in favor of a high-tech career – and will always regret it. My next-eldest brother, on the other hand, followed his own star – writing hilarious fiction, doing incredible stained glass work, fighting political and bureaucratic bullshit on the part of several goverment agencies – and living by the skin of his teeth and his totally unsupported confidence.

The common argument in favor of our current arrangement is that it is the most efficient way to ‘get things done’. That may be true, depending on what things need to be done. Unfortunately, once you step into the trap of doing-for-the-sake-of-money, not only is the value of your work out of your control, the final product of your work is also out of your control in most cases. One might argue that 25 years of keeping NYSE’s most critical computer system operational did not make me directly culpable for criminal activity, but it did play its role in keeping the financial ship afloat. And the misuse of that financial empire imposed poverty and oppression on millions through fraud and exploitation.

If I were forced to be on my own today, I’d probably be living in a mud hut with a leaky roof, eating (if I were lucky) whatever I could coax from the ground and certainly not typing messages to the world (although I might be writing poems). On the other hand, if I had been on my own at the age to 20 or 25, within a different culture, I might be living in a tidy log home such as my niece and her husband build, felling the trees themselves, milling to logs and lumber, doing every bit of the bulding, from foundation to rooftop. I might be growing almost all my food as my grandmother did. I might be hunting, trapping, fishing, foraging and gathering. I might be tending livestock for food, clothing, etc.

IMHO, the solution is a middle ground. Drop out of the rat race (even if you win, you’re still a rat) and ‘homestead’ (I use the term loosely) with a small group of like-minded people. You’ll be a lot less vulernable to the slings and arrows of outrageous fortune than if you were a hermit, but you’ll be a lot less vulnerable to disruptions of the supply chain from climate change and the machinations of the rentier class.

And you will be much more free. Maybe even free enough to find and follow your calling.
Like MLK, I have a dream. I also have a plethora of cockleburs to get rid of. 😀