There’s a reason I suppress spontaneity.

Central Park West (at the time) was heavily populated by the widows whose late husbands had survived and prospered during the Great Depression. It was therefore a bastion of propriety and very elite snobbery.

I was strolling down Central Park West one summer day, approaching one of the buildings whose monthly rent exceeded my yearly salary. A cab was parked at the curb, with the cabbie holding the door open. The building’s doorman was conducting an elderly lady and a young woman to the waiting cab. The woman was carrying the smallest dog I’ve ever seen. Imagine a mini-Chihuahua. A new-born. No! Smaller!

After 2 seconds or so, I hurried on down the street, leaving the young woman laughing uncontrollably.

There was Noon and Swan and Humphreys, and Shannon Bell and Miller
and little Alferd Packer too, who was the hungry killer,
hungry little Alferd, so soon to be a killer.

The miners were not mountain men and soon supplies ran low.
They could not go out hunting in the deep and drifting snow,
the savage mountain blizzards and the icy, endless snow.

Now Alferd’s head was made of flint, his heart was even flintier.
He murdered his companions, just to see him through the winter.
He filled his dinner pail with them to last him out the winter.

He was caught and thrown in jail but he soon had broken free,
til they took him Wyoming, in the year of ’83,
in the valleys of Wyoming, in 1883.

We find that you are guilty and we hope that you will die
for turning your companions all into prospector pie,
for roasting all your comrades underneath a winter sky.”

Then they stood little Alferd up in front of old Judge Gerry,
who felt that Alferd’s eating habits were not sanitary,
and had a grudge, moreover, because Alferd was – so hairy.

I think there is a moral here for every politician:
if you can’t get the votes, just get your rival in the kitchen.
You can win elections from the comfort of your kitchen. 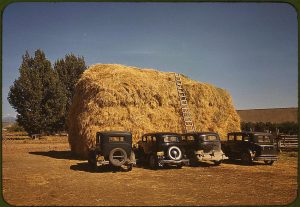 When the closing hymn started, Liza raised her voice along with the rest, but she hoped the Lord would forgive her mind being elsewhere. Guiltily, she was running over what she had to get done after church was finished. First, she must get the younger children out of their Sunday finery and make sure the older ones were kept busy at something that wouldn’t ruin their clothes…no tree-climbing, no exploring the barn with the neighbor children. Then she had to finish preparing Sunday dinner, including baking rolls and a couple of pies, as well as roasting a pair of chickens and fixing the vegetables. If they had enough cream left, she might put the younger ones to making ice cream. This dinner had to be special, since the minister and his wife were coming and bringing a guest. Mr. Langdon was easy enough to please and preferred to live simply, but he set great store by entertaining properly and would want everything just right.

She had been there three weeks and he seemed satisfied with her work, but he wasn’t a very talkative person and she could never tell what he was really thinking. She thought that must be the difference between kin and strangers. With kinfolk, you had shared so much living you could almost read each others’ minds, but a stranger was an unopened book. Some looked to be so boring you didn’t want to bother, while others might be exciting or interesting. The young man the minister was bringing to dinner, for example.

Liza glanced over at him now. He couldn’t be more than about twenty-two, but somehow he had a more grown-up look than many of the men twice his age. She watched him as he glanced around the congregation, seeming to look for something he couldn’t find. He had more assurance than the other young men, who seemed to have so much trouble avoiding blushing when they accidentally caught the eye of one of the young ladies. She saw Johnny Wilson making calf’s-eyes at her from the end of the pew. It was as close as he had dared approach her since he had announced that he was going West. He had great dreams of getting rich in the silver or gold mines and Liza had figured prominently in those dreams. While she sympathized with him, he wasn’t her idea of a husband. Perhaps she was too choosy, but she wasn’t ready yet to give up her own dreams. Besides, she told herself, thirteen is a trifle young to marry. She wouldn’t consider herself an old maid until, say, the ripe old age of seventeen.

The minister was closing the service and people were beginning to stir about, collecting their wits and children. Mr. Langdon led his family up the aisle and Liza trailed along behind. Outside, the grownups mingled with friends while the younger children stared at each other tongue-tied. The older boys whooped and yelled and ran around, trying to find some way to impress the girls, who studiously ignored them.

Liza wondered what caused these boys and girls to suddenly one day become adults and change their whole way of behaving. It must be something to do with falling in love, although she found this hard to believe. She had once been in love with a boy for a whole week and he with her for a month, but it hadn’t changed either of them that she could tell, except to make them act silly. A voice out of nowhere asked why she seemed so different from the other girls her age, but she shook off the question unanswered. That young visitor now. He might be a different story. She saw several of the eligible young ladies casting sheeps-eyes at him. He looked straight at them, rather casually, as if they were part of the landscape. Then his eyes would drift away, looking for something else. She reckoned she would find out more about him at dinner. She gathered the younger Langdons, leaving the older ones to accompany their father, and began to walk back to the Langdon home.